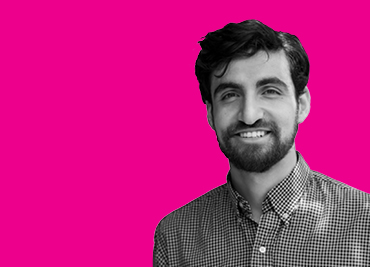 "This organization creates opportunities and opens doors, often, for people that don't think those doors even exist."

Alvaro Morales, a graduate of Amherst College, is an immersive media creator living in Sterling, Virginia. Frisly Soberanis, a graduate of the Academy for Careers in TV and Film, is a filmmaker living in Queens, New York. In 2016, Alvaro and Frisly received a grant from Immigrants Rising’s Fund for Undocumented Social Entrepreneurs (FUSE), which enabled them to develop the Family Reunions Project (FRP). FRP seeks to illustrate the human impact that emerging VR technology is poised to have on millions of people around the world who have been separated from their loved ones.

How did you get first learn about our organization?

Morales: I knew about it before applying to FUSE. When I was pre-DACA, I used the resources on the website to figure out how to go to college.

Frisly and I are really fortunate to be a part of the first cohort of FUSE grantees. It’s been really amazing to join a supportive community of folks that are always willing to pick up a phone or answer an email. And we’ve been able to develop connections that led to other connections, including ones that led to more funding.

E4FC [Educators for Fair Consideration, now known as Immigrants Rising] turned an idea into something that materialized. Partnering with E4FC ended up professionalizing a passion project and enabled a lot of doors to open.

What have you learned while working on the project?

Soberanis: Since I’ve become part of E4FC, I’ve been really working on myself as well as working on the project. With E4FC, what I’ve experienced has been a very wonderful, warm relationship with a group of folks that are really committed to listening and collaborating with undocumented folks. It’s a very safe, healing space for us.

During the entrepreneurship retreat that E4FC held, we learned a lot about business, but we also created this community of friends and supporters. That was a big moment for me, and I’ve been thinking about the importance of community ever since.

Morales: Just yesterday I received a package from a family whose virtual reunion took place about two months ago. It was the sweetest note from the mom and her three sons about how grateful they were.

A lot of the families we’ve worked with have been older undocumented folks. They’re not the DACA kids that everyone supports. They’re people that often get thrown under the bus or are completely left out of these conversations. I think it’s really important to center a lot of work on them because they’re the ones that made big, big sacrifices. A lot of our parents have gotten to the age now where they have family members who are getting old or passing away, and they’re not able to return for funerals or say goodbye for the last time.

What is most important for our organization as we move forward?

Morales: This organization creates opportunities and opens doors, often, for people that don’t think those doors even exist. That is extremely crucial right now, with all this uncertainty.

Soberanis: I think that it’s really important right now to support solutions and fund people who need it most and, also, to let the people who are most directly affected create their own solutions and their own businesses. That’s something that E4FC does, unlike other nonprofits that have their own ideas which they then impose on other folks. It’s going to be exciting to see E4FC as it continues to grow and expand, with more community, more networks.