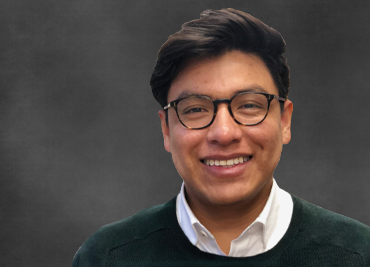 What happens when you can’t pursue your dreams in the United States? Meet David Cruz Hernandez, who moved to England to pursue a career in medical research in 2017 after having been undocumented (without DACA) for 11 years.

David is currently pursuing a DPhil (PhD) in Medical Sciences based in the Radcliffe Department of Medicine at the University of Oxford. From 2015 to 2017, he was a member of our Immigrants for Inclusion & Change, a peer-support group for undocumented students unable to benefit from state or federal policies such as DACA or in-state tuition.

David was born in Oaxaca, Mexico. When he was three years old, his family decided to migrate to Mexico City. His primary school consisted of a dirt floor and walls made of cardboard covered with tar. His secondary school “teacher” was an old 32’’ CRT monitor. Each hour-long class consisted of 20 minutes of TV followed by 40 minutes of class discussion about what they’d just seen. In 2002, David’s parents moved to Watsonville, CA, to work as seasonal farmworkers picking berries and tomatoes.

David immigrated to the U.S. three years later. He didn’t come in a caravan; he came by himself. He wasn’t put it detention, or even stopped, by immigration authorities.

He took classes at Watsonville High School, attended Cabrillo Community College, and, after 2 years, transferred to UC Santa Cruz, where he obtained his B.S in Molecular and Cellular Biology and B.A in Chemistry. He paid for his undergraduate education by working as a dishwasher, busboy, cook, waiter, farmworker and gardener.

Unfortunately, because David arrived in the U.S. after his 16th birthday (9 months to be exact), he didn’t qualify for DACA and couldn’t work legally. So, even after obtaining those degrees, minimum wage service industry jobs were still the only ones he could get.

So David decided to get another degree—this one an M.S. in Stem Cell Biology from SF State—as a way to bide his time until expanded DACA or the Dream Act or something else happened.

Then something else did happen. Trump got elected. And David realized that his prospects of legalizing had grown much dimmer.

Six months after the election, David started a GoFundMe Campaign to raise the $3K he needed to pay for his visa and travel expenses to England, where he’d just been accepted into a PHD program at the School of Medicine at Oxford.

In his appeal letter he wrote: “Although I have lived in this country for almost 11 years, although this country is where my family lives, and although I believe this country to be my home, I am still undocumented. The lack of a defined pathway to citizenship, the lack of government support, the continuous threat of ICE raids in ‘sanctuary cities’, the deportation of people with no criminal offenses including “Dreamers”, and the unwillingness of universities to even recognize non-DACA undocumented students as domestic students has made me realize that a scientific career will no longer be possible in this country…I am thankful for everything this country offered to me, the opportunity to get a higher education and to be reunited with my family. Above all, this country, my country, gave me a home and a sense of hope. I am leaving to pursue my career, but my plan is to come back one day, one way or another, and pay my dividends to America.”

It’s been just over a year and a half since David left the U.S., and yesterday night I reached out to him to ask how he felt about his decision: “I am happy I took that decision. Being undocumented makes everything difficult. Even adventure seems impossible. Now I can travel pretty much anywhere in the world (except the U.S. of course), I can study anything I want to, I can find the perfect job. It all seems so easy. Why would I want to go back to the U.S., a place where I’ve been called a “drug dealer, criminal and rapist”, a place where my undocumented status would never change?”

“I do miss my family,” he admits. His parents are still undocumented farm workers in the Pajaro Valley, still working 10 hours a day during picking season, still paying taxes without the promise of ever getting social security. “They seem tired. They often talk about going back to Mexico. My younger sisters will start high school soon and once they go to college my parents will go back to Mexico. That’s the plan now. I will see them there.”

David’s story was written by Katharine Gin, Co-founder and Executive Director of Immigrants Rising. Katharine shared it at a live event hosted by the New York Times and the Curran Theater in San Francisco on February 26, 2019.