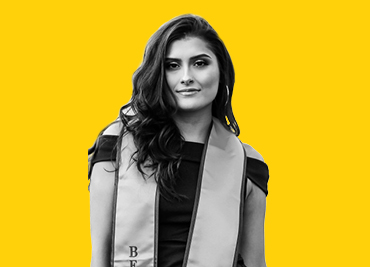 "Being a part of this organization has really helped me understand my own narrative and not just conform to what other people tell me I am."

Mitzia Martinez is a double major in African American Studies and Legal Studies at UC Berkeley. Mitzia joined Immigrants Rising as an Outreach Ambassador in 2014, then became a Community Engagement Fellow in 2016, and is currently serving on the Legal Services Team.

How did you find out about our organization?

I saw a Facebook posting about a call for applications for the Outreach Ambassador Program at E4FC [Educators for Fair Consideration, now known as Immigrants Rising]. I was really shocked. I was like, “Wait, there’s an organization that just focuses on undocumented students?” It made me really emotional because in high school I didn’t have any support at all when it came to my status.

I did the application and got accepted to be an Outreach Ambassador. I later became a Community Engagement Fellow, and now I work with the Legal Services Team.

Can you share a few favorite memories of your experience?

I often tell people this story about making a presentation at a conference of Latinx students in Hayward. I said, “I’m undocumented, and I want to go to law school. I really have no idea how I’m going to get there yet, but I’m very committed to finding out.”

After the presentation a girl came up to me and told me that she also wanted to be a lawyer, but that she didn’t know she could go to college. She thought she had to graduate high school and probably start working, or get married and get pregnant. And I said, “I go to Berkeley and if I can do it, you can do it.”

That’s the beauty I saw in E4FC’s Community Education Program, just bringing people ideas that they think aren’t doable and pointing to examples.

Being a part of this organization has really helped me understand my own narrative and not just conform to what other people tell me I am. I’ve been able to understand why a lot of things that used to seem normal to me while growing up—like avoiding contact with the police (even in an emergency), lying about my birthplace, and being constantly worried and vigilant—are actually not normal. That’s not how people should live. E4FC has allowed me to understand that there’s a better way of life that people are living because they have a social security number.

What’s most important for our organization to do during this political climate?

E4FC has to have even more resources for people, even more support for people who are being told they are not worthy enough to be in the U.S.

The work right now is needed even more because we have to fight two battles: the battle that’s already there, of making the most out of the limited educational, financial and legal resources for undocumented folks, and the battle of not giving up on our community, even though many are on the verge of giving up on themselves because of how scared they are.

Some people are thinking about going back to their countries voluntarily. My family has friends who are going back to El Salvador. That’s their personal decision. But many of us have to stay here. We have to fight this battle together.