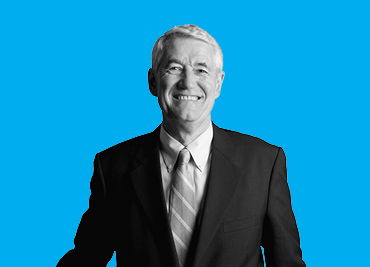 "Supporting undocumented students is a human rights issue, one that every decent American should believe in."

An internationally distinguished physicist and leader in higher education, Bob Birgeneau served as Chancellor of UC Berkeley from 2004-2013. He is also fellow of the U.S. National Academy of Sciences, the Royal Society of London, and the American Philosophical Society. Chancellor Birgeneau has been an ally of Immigrants Rising since 2007 and currently serves on the Leadership Council.

How did you become involved with our organization?

I’ll go back one step further, how did I ever learn about undocumented students?

I was at a UC Berkeley Alumni Association luncheon for low income TAPP scholarship winners and met an interesting young woman who was a junior and TAPP scholar. She started talking about her life, and it emerged in our conversation that she faced extraordinary challenges because she was undocumented. I left that lunch saying, “I’m the Chancellor at Berkeley and I have these students who are at risk in a way that no other students on our campus are. I must do something about this.”

A short time later, I published an Op-Ed in the Los Angeles Times about undocumented students, and that caught the attention of Carrie Evans and Kathy Gin. As a university leader, I felt an obligation to help our undocumented students, but you people were doing it completely out of your pure hearts, which I really admire.

After the Op-Ed was published, I received a veritable tsunami of hate mail with a level of viciousness that I had never experienced before. These hate mongers were trying to frighten me, but they did the exact opposite because I thought, “Just imagine, this is what our undocumented students have to live with every single day?” It made me realize how important E4FC [Educators for Fair Consideration, now known as Immigrants Rising], was in terms of providing support and a safe place for these extremely vulnerable people.

When we were just starting this at Berkeley and I was trying to figure out how we could provide much needed support to our undocumented students, I decided to have a dinner at the Chancellor’s residence for RISE in which we would basically treat the undocumented students as if they were major donors. This meant that we had the same high level caterer and the same fancy dinner. I invited the Haas family and some others whom I thought would be supportive of these students to come to the dinner and meet our RISE students. At the end of the dinner, I asked the students to stand up and tell their stories. Their stories were so compelling! I did not have to ask any of the well-to-do people at the dinner for donations. They just said, “How can we help?” Most importantly, Elise Haas stepped up and made a generous gift to create the Haas Dreamer’s Resource Center in honor of her father, Robert D. Haas, This center has proved to be transformational for our undocumented students. It is a community space where students can access professional academic counseling, mental health support, peer support, legal support, computer stations, books and a place to study between classes.

Sadly, we also had pushback from other people. We had donors who said, “I’m never giving another dime to Berkeley.” One donor actually went back to look at the gift agreements of his previous donations to make sure that none of his funds could ever be used to support undocumented students. It was shocking to me that some people in the Berkeley community could be that mean-spirited. However, at the same time, the Haas family stepped up, and then many other major donors joined them in supporting our undocumented students. In the end, it was quite uplifting.

What is your perspective on the issue of undocumented immigrants will unfold, particularly in higher education?

I think it continues to be quite uneven. One of the things that I did while I was still Chancellor was to get the Association of American Universities to put out a statement endorsing the support of undocumented students. The AAU did indeed do this. However, during the discussions, several leaders of Southern universities walked out of the room because it put them in such a complicated position. More recently, I was recruiting emeriti university leaders to sign on to an amicus brief supporting sanctuary cities. Many people from the best universities in our country signed on but, unfortunately, not a single one from a red state

Nevertheless, I am not pessimistic. I met a tea party conservative legislator in Tennessee who said, “We can’t just deport all of these people. We need to find a solution for them” We need to figure out how to identify more of these people on the right and build bridges to them.

It is critical that the plight of undocumented students not be presented as a progressive left issue but rather as an American issue. It is a human rights issue, one that every decent American should believe in.