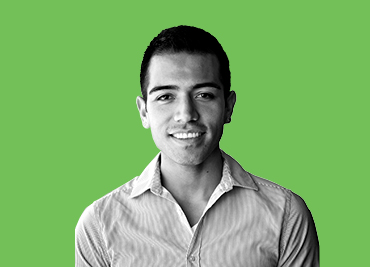 "It changed my own perspective of myself; I felt a sense of empowerment that I didn't have before."

Julio Navarrete earned a BA in Radio, Television, Film, and Theater from San Jose State University, and a MA in Education from The National Hispanic University. He currently teaches Spanish and advises the Science and Eco Club at American High School in Fremont. Julio joined Immigrants Rising in 2011, was the Arts & Creativity Manager from 2012 to 2014, and currently serves on the Leadership Council.

In 2011, I was in my fourth year of teaching and was at a charter school in San Jose. The school found out about my status through the IRS and asked me to resign. Those 4 years of teaching, I had been living in secrecy about my status for fear of losing my job. And I hadn’t really done anything to support the immigrant community.

So I decided to get involved. I was selected for a Dream Summer Internship, which was part of the UCLA Labor Center. Dream Summer interns in the Bay Area worked with E4FC [Educators for Fair Consideration, now known as Immigrants Rising]. I just felt so at home. It was so empowering to be around people that were so like-minded, so passionate and were advocating for what we know is right and just.

Later, I worked for E4FC running the Creative Writing Program. I developed workshops and a national creativity contest for undocumented folks all over the U.S., and helped to create an arts and creativity website called “Things I’ll Never Say.”

How did working on those programs impact you?

It changed my own perspective of myself; I felt a sense of empowerment that I didn’t have before when I was in secrecy, not saying anything about my status. I also realized the power of storytelling as a way of reaching people who wouldn’t know about what we go through.

I’m back in teaching, but now, with a new set of tools, with creative writing, and I’m incorporating that into my curriculum as much as I can. More than anything it’s about being open about my identity, and advocating as much as I can for undocumented students. I’m using my experience as a way of, hopefully, inspiring other young students who may feel like I felt before I came to E4FC.

It would also have been very challenging for me to get my Master’s in education, if it weren’t for E4FC. I had a challenging time paying for my Master’s, and E4FC supported me by allowing me to work there. They also connected me with Jorge Ramos, with whom I still keep in touch, and he’s the one who basically paid for the majority of my Master’s degree. E4FC also gave me the information and resources I needed to go through the political asylum process.

I was really split when I made the decision to leave E4FC because I felt like I still had so much more to give to the organization, but then I also realized that I’m so passionate about teaching and contributing in this way.